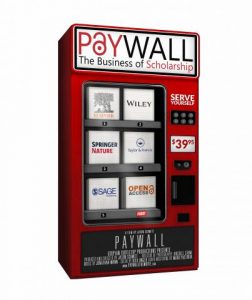 “Paywall: The Business of Scholarship,” a documentary about the hidden costs of academic publishing and the need for open access to research and science, will premiere in Potsdam at the Roxy Theatre on Wednesday, November 14, the event free to attend and sponsored by the Office of Student Life and the School of Arts & Sciences. There will be a reception at 4:30 p.m. at the Roxy prior to the film screening at 5:00 p.m.

The film is screening at 330 institutions around the globe this year. In the first month alone, there have been over 100,000 views of the film online after the release. Last week, the film was screened at the United Nations with Clarkson President Tony Collins in attendance. President Collins will introduce the film prior to its starting.

Academic publishing is a $25.2 billion a year industry. To put that into context, the publisher Elsevier’s journal Biomaterials costs an average of $10,702 for a yearly digital subscription. That’s a lot of money to pay for access to publicly funded research. In fact, in 1995, Forbes predicted that the internet and digital distribution of scholarly research would level the playing field on publishers and make them obsolete.

Nothing could be further from the truth.

The film, produced and directed by Professor Jason Schmitt, Chair of Clarkson University’s Communication & Media Department, dives into the need for open access to research and science, questions the rationale behind the $25.2 billion a year that flows into for-profit academic publishers, examines the 35-40% profit margin associated with the top academic publisher Elsevier and looks at how that profit margin is often greater than some of the most profitable tech companies like Apple, Facebook and Google.

The 65-minute film takes the audience on an excursion to where academic publishing began in 1665: The Royal Society of London. Schmitt illuminates how access to research is often limited for those outside prestigious academic institutions—especially within the Global South— and showcases how open access models like arXiv.org have played a strong role in information dissemination in physics, mathematics and computer science. He tries to make sense of the infamous scholarly pirate research service, Sci-Hub, which houses more than 67 million research papers that are available for free download, by interviewing its creator, Alexandra Elbakyan, who is currently in-hiding in Russia.

“I was drawn to this documentary topic when I learned that public funds, which come out of taxpayers’ pockets, fund important scientific research that is locked behind paywalls and inaccessible to the general public,” says Schmitt. “As I learned about these issues, I was struck by the global energy and enthusiasm toward open access and the strong resistance to the movement by many of the world’s top publishers.”

“Further, I found that the funds paid to academic publishers are burdening the higher education market, contributing to the rising tuition fees at all universities, the closure of many institutions and, ultimately, limiting science and progress.”

Schmitt and his film crew traveled over 45,000 miles and interviewed over 70 key leaders in academic scholarship, including professors and librarians at top tier universities and leaders at Wikipedia, Creative Commons, the Smithsonian, the Royal Society, Open Society Foundations and the Bill & Melinda Gates Foundation.

Staying true to the open access model: this film is free to stream and download and maintains the most open CC BY 4.0 Creative Commons designation to ensure anyone regardless of their social, financial or political background will have access to view this film.

About Jason Schmitt, Producer and Director

Jason Schmitt serves as Chair of the Communication & Media Department at Clarkson University in Potsdam, NY. He concentrates his research on online education impacting a global audience, open access relating to academic publications, and media industry future trends. He has been a regular contributor to Forbes, The Huffington Post, EdSurge, and Slate and is a regular on news outlets and radio for expert opinions revolving around societal implications associated with new media trends.

Prior to this project, Schmitt was the lead interviewer/field producer for the documentary, “Louder Than Love,” a film on the historic rock venue The Grande Ballroom and its influence on rock and roll music. The film was awarded an Emmy in 2016 and has been to more than 35 festivals from Detroit to L.A and London to Australia.