Elizabeth Stein has been appointed assistant professor of political science at Clarkson University. 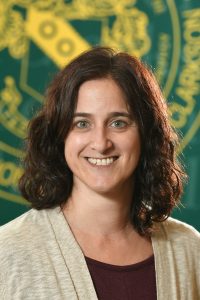 Stein concentrates her research on four main areas, which include comparative political economy, comparative political communication, contentious politics, and Latin American politics. She has published journal articles and book chapters and presented her research on these topics at multiple conferences. She co-authored the article, “Trump’s war on the news media is serious. Just look at Latin America,” which was published by The Washington Post on February 16, 2017.

Before coming to Clarkson, she was the Mark Helmke Postdoctoral Fellow on Global Media, Development and Democracy in the School of Global & International Studies at Indiana University Bloomington. Prior to that, she was an assistant professor at the Institute of Social and Political Studies at the State University of Rio de Janeiro in Brazil and an assistant professor of political science at the University of New Orleans.

She is fluent in Portuguese and Spanish.