Elizabeth Pienkos has been appointed assistant professor of psychology at Clarkson University. 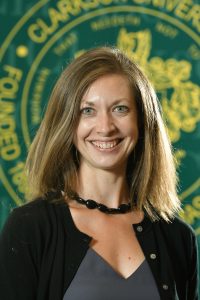 She is the recipient of the 2018 Teaching Award at the Graduate Institute of Professional Psychology (University of Hartford) and the 2014 Association for the Advancement of Philosophy and Psychiatry Karl Jaspers Award. She also received the 2016 and 2017 Dean’s Research Funds grant from the University of Hartford, and the 2014 National Psychologist Trainee Register Credentialing Scholarship. In graduate school, she was awarded the 2014 APA Division 39 (Psychoanalysis) Graduate Scholars Award and the 2009 Scholar’s Award from the Graduate School of Applied and Professional Psychology at Rutgers University.

She is a member of the American Psychological Association; APA Division 5, Quantitative and Qualitative Methods; APA Division 24, the Society for Theoretical and Philosophical Psychology; the Society for Qualitative Inquiry in Psychology; the Interdisciplinary Coalition of North American Phenomenologists; the Association for the Advancement of Philosophy and Psychiatry; and the National Register of Psychologists.

Before coming to Clarkson, Pienkos was an assistant professor at the Graduate Institute of Professional Psychology at the University of Hartford, where she taught courses in clinical psychology. Prior to that, she worked as a clinical psychologist for the Nova Scotia Health Authority at Cole Harbour Community Mental Health and the Recovery and Integration program.