Clarkson University will be screening a shortened, 30-minute, version of John Davis’ documentary “Born to Rewild” followed by a discussion and Q&A session. The film follows Davis as he treks 5000 miles over eight months from Mexico to Canada to bring awareness to the importance of connected wildlife corridors along the spine of the continent. The screening will take place on November 14th at 5:30 PM in the Student Center, MPR A, followed by a Q&A with John Davis. 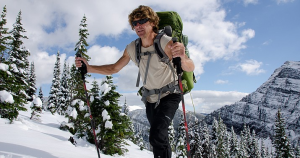 John Davis is a wildways scout, editor, and writer.  Along with Dave Foreman and a dozen other prominent conservationists, John was a co-founder of Wildlands Network a quarter century ago and served on its board of directors for many years.  He serves now on boards of the Algonquin to Adirondack Conservation Collaborative (A2A), RESTORE: The North Woods, Eddy Foundation, Champlain Area Trails, and Cougar Rewilding Foundation.

In 2011, John completed TrekEast, a 7500-mile muscle-powered exploration of wilder parts of the eastern United States and southeastern Canada—sponsored by Wildlands Network and following lines suggested in Dave Foreman’s book Rewilding North America—to promote restoration and protection of an Eastern Wildway. In 2012, John wrote a book about that adventure, Big, Wild, and Connected, published by Island Press.  In early 2013, John set out from Sonora, Mexico, trekking north along the Spine of the Continent as far north as southern British Columbia, Canada, finishing in late September, and again promoting habitat connections, big wild cores, and wide-ranging species, including top predators—all of which would be well served by fuller protection of the Western Wildway he explored.  That adventure is the subject of the film Born to Rewild.

In autumn 2017, John traversed the US part of the A2A connection, which he considers a top regional and continental conservation priority.  He also considers Puma reintroduction in the wilder parts of eastern North America to be a top priority.