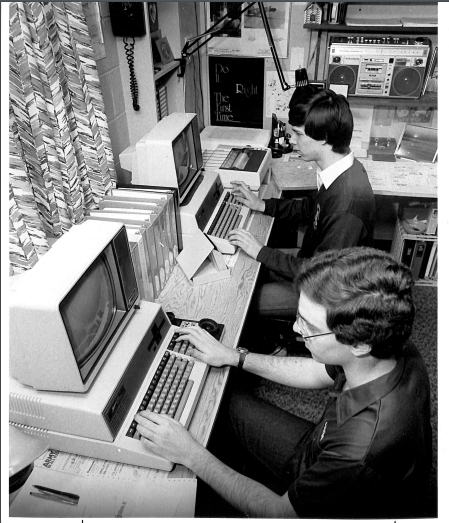 Z-100 Desktop Computers were given to each incoming freshman in 1983. The new model retailed for over $4,000, but the students owned it by paying a one-time $200 maintenance fee and $200 each semester. Clarkson University became the first college in the nation to give each incoming freshman a personal computer.

Kathy Damon and her father, of Bitburg, Germany pick up the incoming freshman’s new Zenith Z-100 computers, in the fall of 1983.

Personal Desktop Computer Program in Fall 1983. 800 freshman were required to have his/her own computer, Zenith Z-100.

Students working with their Zenith Z-100.

Students working on a problem using their Z-100 personal desktop computers. These computers were a familiar sight in dorm rooms at Clarkson College in Potsdam, New York (1983). Freshman were required to have the machine during their years at the College.

Clarkson’s first personal computer, the Zenith 100, distributed to all freshman in 1983.

Join Us Tomorrow, Tuesday, December 7 for First Tuesday at McDuff’s!